Women have painful menstrual periods. What to do about that? Why take pills when you can inhale lavender oil according to a new study.

More women under 30 miss school or work because of painful menstrual cramps than for any other reason. They are plagued by abdominal cramps, sharp or aching pains, and lower back pain.

Researchers from Iran explored the effect of Lavandula angustifolia (lavender) inhalation on the painful menstrual symptoms known as dysmenorrhea.

The researchers studied 96 female students suffering from dysmenorrhea and residing in a dormitory at Tehran University of Medical Sciences. They followed the subjects for four months.

Half were randomized into an experimental group and the other half served as the control group.

The students were asked to apply three drops of oil on their palms, rub them together, keep their hands 7 to 10 centimeters from their nose, and inhale for five minutes.

The treatments were administered for one hour after they experienced pain during their period.

They were also asked to use the treatment every six hours for the first three days of their periods.

The control group was 6.8 times more likely to have abdominal pain and backache than the lavender group.

Also, the control group was about 12 times more likely to suffer tiredness, nausea, and headache than the lavender group.

They were also 16 times more likely to faint. The researchers did not find any association between lavender inhalation and the amount of menstrual bleeding.

According to the authors, painful menstrual periods are not completely understood. But most symptoms can be explained by the action of uterine prostaglandins.

These chemicals form in the lining of the uterus during menstruation. They can cause muscle contractions, which lead to pain and decrease blood flow and oxygen to the uterus.

Prostaglandins may also be responsible for nausea and diarrhea some women experience.

The researchers noted that essential oil inhalation therapy has been used in the treatment of various diseases.

Lavender, in particular, is noted for promoting positive emotional states including relief of stress and depression, improving mood, and relaxation.

When inhaled, lavender is absorbed into the lung and blood through the nose.

The researchers noted that when essential oils extracted from plants are inhaled, olfactory receptor cells are stimulated and the impulses are transmitted to the emotional center of the brain, or the ”limbic system.”

It has been used to treat infection, anxiety, fever, varicose ulcers and carpal tunnel syndrome. It also acts as a sedative and anti-spasmodic.

The researchers suggested it could also be used as an alternative therapy for patients with depression, and to decrease agitation.

Other studies have shown that lavender is useful in midwifery to relieve pain and discomfort following labor.

The authors suggested that because of the simplicity, cost-effectiveness, and lack of side effects, inhalation of lavender could be used by all women suffering from painful menstrual periods.

Its pleasant scent produces calming and relaxing effects on the body. The oil can also relieve irritability.

Essential oils can be used in warm compresses and soothing baths. Other methods of using essential oils include inhalers and infusers.

The authors recommended adding lavender or other essential oils to a carrier oil like sesame, almond, or grapeseed oil before using directly on the skin.

The carrier oil helps ease the absorption of the essential oils through the skin or the mucosal surfaces of the nostrils.

Conclusion: You can use this home remedy, lavender essential oil to relieve menstrual pain, but first consult with your doctor. 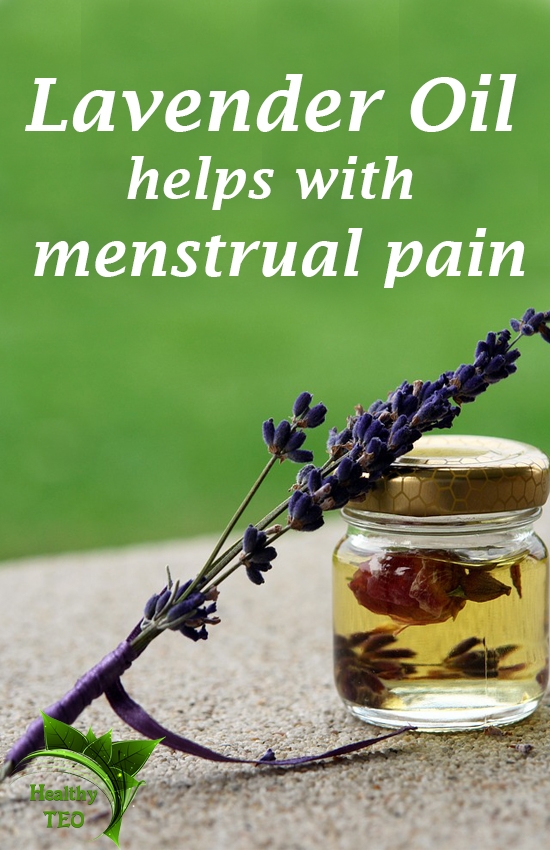